Around 14,000 Australians were in Tobruk during the siege. After they returned to Australia, the veterans looked for continued comradeship. They wanted to perpetuate the ties created amongst those who were in Tobruk during the siege and to ensure any in need were supported. In 1944, the Rats of Tobruk Association, NSW was established. This was followed by the establishment of the Victorian Branch on 2nd October 1945. From there, other branches and sub-branches were established across Australia. In 1946, a Federal Council was established, which was responsible for coordination of the many branches and sub-branches being established.

The Association continues to have its monthly general meeting at the historic Tobruk House in Albert Park, a tradition that has lasted more than 60 years. All members are welcome to attend. Meetings are normally held on the 4th Friday of the month (refer ‘Calendar of Events’ for more information).

Descendants and relatives of Tobruk veterans are invited to join the association. By doing so, you will join like-minded people who want to ensure the name and story of the mighty Australian ‘Rats of Tobruk’ are perpetuated.

The Story of Tobruk House 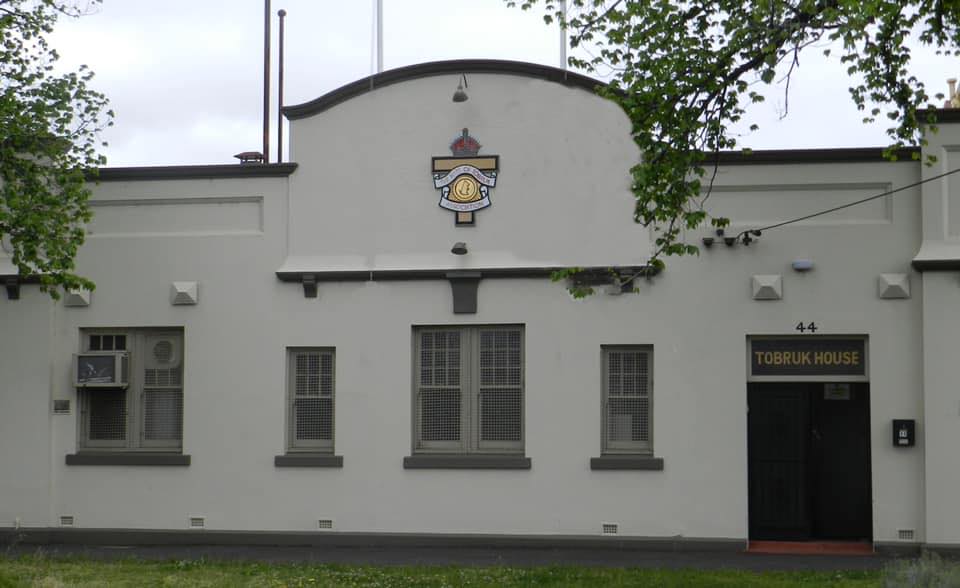 ‘At precisely 3.55 p.m. on Saturday, 29th September 1956, Lt-Gen. Sir James Leslie Morshead, alias “Ming the Terrible”, alias “Rat Number One”, turned the specially inscribed gold key to open the door of TOBRUK HOUSE1 What if these walls could talk, what a story they would tell!

(This story is in mainly based on information contained in articles published in various editions of the Tobruk Echo and its successor the Tobruk House News.)

The first General Meeting was held at Tobruk House on 28th March 1956. 2 This was the start of a tradition that continues to this day with the current General Meetings being normally held monthly on the fourth Friday of the month. However the story starts before the 28th March 1956.
The Victorian Branch of the Rats of Tobruk Association was formed on the 2 October 1945. A few years after this, the then members decided that they wanted ‘a place of their own – to eat, sleep, drink, play, relax and generally have fun.’ This was made the Association’s No. 1 objective. Their initial plan was quite grand being a multi level building comprising:

If this was being planned today, there is no doubt that a floor to be filled with poker machines would have been included.

These pioneering members realised that this was an ambitious plan which would require considerable money to be raised, so they set up a Building Appeal Fund to which all members were asked to donate and planned to undertake a number of fund raising activities such as raffles. The fund motto was “Nothing is impossible to a willing heart.” 4 The Patriotic Building Fund was established in October 1949. Donations and funds from other activities flowed in quickly at first, but over time it all started to slow down due to a fall in support by the members. In 1955 there were issues regarding the administration of the Patriotic Building Fund. The fund had to carry on without a Treasurer and as a result there was a serious delay in preparing statements for the auditors. ‘There was not the support from members that there should
be. At the rate of progress now indicated we could not erect a building in 20 years. The question also arose could we rely on sufficient members turning up regularly when we obtained a building?’5

At a general meeting on 27th April attended by about 50 members, they debated and considered a motion that the Building Fund be abolished. ‘As the facts emerged in a clearer light there was an immediate reaction from those members present, who, one by one, acknowledged that the general lack in interest was to be deplored, but also were unanimous that the Building Fund should be carried on, if only for the reason that the fine work achieved by the Building Fund pioneers would otherwise be wasted and all to no avail……Finally, on a show of hands, the motion was unanimously defeated.’ 5

The debate on the motion must have had an impact, because in the July edition of the Tobruk Echo in 1955, it was announced that a suitable building had been located and actions were underway to purchase it. The building was located at the corner of Victoria Avenue and Mowbray Street, in Albert Park. ‘Briefly, it is a single story, stone building with brick walls, built in 1926. It has a total floor space of 2,670 sqft (248 m2), with a dance floor (covered now) measuring 86 ft by 45 ft (26 m by 14 m). Two small rooms in front serve as a cloak-room and kitchen, the later serviced with gas and a stainless steel sink. The building is in fairly good repair, and evidently does not require much immediate renovation. The site is well serviced by transport. The Albert Park Station is about five minutes walk away and the Preston – South Melbourne tram passes by the entrance.’6 A £100 ($200) deposit was paid on 7th July 1955. On 7 March 1956 the purchase of the building was finalised for a total price of £9,654 ($19,308). A first mortgage of £3,000 ($6,000) was required to help finance the deal.

As soon as the Association obtained possession of the hall, a number of improvements were undertaken including the installation of fluorescent lighting, the building of a stage across one corner, upgrades to the kitchen and toilets, repainting of the hall and a number of repairs. A piano, 1,000 tubular steel chairs and a table tennis set were also purchased. The total cost of these was around £1,000 ($2,000). 7

Tobruk House was now ready for its official opening on 29th September 1956. It was Saturday, 29th September; the day for the gala opening of ROTA’s new headquarters had come.
Tobruk House was to be officially opened by Lt-Grn. Sir James Leslie Morshead. During the war Morshead was the major general in command of the 9th Division in the Middle East. Morshead led his division through the siege of Tobruk where his aggressive defence denied the Germans a breakthrough. He was highly regarded by his men, who referred to him at different times as “The Boss”, ”Ming the Terrible” or “Rat Number One”.

The weather was not kind. It threatened to spoil the day. Hours before the scheduled start of proceedings frequent heavy showers fell. Then miraculously, just before the start the sun broke through and remained shining throughout proceedings. ‘Just prior to this dramatic climax a record gathering of 300 Rats were “on parade” at the Albert Park Central School nearby. They came from the four corners of the State to muster under their unit standards. Headed by the Caledonian Pipe Band, the column swung into line down Victoria Avenue towards Tobruk House, in fine style. “The Boss” [Morshead] stood to attention in front of the door and was a keen observer. He never said a word, but the glint in his eyes was proof to what he felt. As
“Ming” [Morshead] turned the key of the door somebody in the ranks yelled: “Look out – Morshead’s breaking through again!” When the door was open the old Digger cry of “HO-HO-HO” let rip. Sir Leslie smiled broadly. “I’ve heard you do better than that” he snapped.’1

The Rats were not long in filing into the hall and the celebrations went on for many hours. There must have been many sore heads the next day. The specially inscribed golden key used by Sir Leslie was presented to him.

In the July 1957 edition of the Tobruk Echo, it was announced that the final payment on Tobruk House was paid in July. ‘The Victorian Branch now owned Tobruk House lock, stock and barrel.’8 This was 15 months after the purchase of the building, when the first mortgage was taken out. A fantastic achievement by any standard. ‘The Rats had again proved that they could together achieve a desirable end against heavy odds’ 8 Over the years, Tobruk House has served the Rats well. In addition to the monthly general meeting, there have been many functions including Anzac Day reunions and lunches, Christmas lunches, children’s Christmas parties, school visits and regular dances in the earlier years. The walls are full of memorabilia which has been donated over the years. Tobruk House is like a time capsule which has hardly changed since the renovations shortly after its purchase. You can feel the presence of the Rat’s who have passed, whenever you walk into the hall.

Around 2005, the number of living Rat members was dwindling. The Rats were in their late 80’s and early 90’s. They started to consider what to do with Tobruk House which was now worth a lot more money than what they originally paid for it. The upkeep costs of the building were also draining the Association’s financial reserves. The Rats very much wanted control over what happened to the money the building was worth. After giving the matter considerable consideration they came to the conclusion to sell the building whilst they still had control over what to do with the proceeds. They decided to donate most of the proceeds from the sale to Melbourne’s Royal Children’s Hospital. The day originally set for the sale was 4th April 2007, however this was subsequently rescheduled to 19th April.

As the date of the auction was close to Anzac Day, the sale of the building got a lot of coverage in the media. On the night before the sale the 7.30 Report on the ABC covered the story. Bill Gibbins was watching and was moved by the story told. He decided to ring the Auctioneers, Bill Shelton telling him ‘Look, I was so moved by the 7.30 Report, I really want to buy the building if I can.’

‘On April 19th 2007 Tobruk House went to Auction………….The Hall was packed with people mainly waiting to see what result would be achieved. There was only a handful of bidders among the huge audience, plus one bidder on the phone from interstate. Bill Shelton the Auctioneer from Allard & Shelton Pty Ltd [His father was one of the Tobruk defenders who died during the battle.], started the bidding at $1,000,000 with rises of $50,000 bids. Soon there were only 2 left who went on bidding; the phone bidder called it stumps when the figure of $1.7 million was reached, one more bid from the eventual winner sealed the deal [for $1,735,000.] The atmosphere in the hall was filled with jubilation as members celebrated such a wonderful result. The new owner Mr Bill Gibbins announced after the excitement had died down, the ‘Rats’ could stay on until the end of their glorious lives; he also said he would like it to continue to be used by other military organisations indefinitely.’9  After the auction Bill Gibbins also said ‘These guys all gave their youth and some of them gave
their life, you know? I’m just giving money, this pales into insignificance, doesn’t it?’

There were eleven Rats in attendance. They were over the moon with the result, well over their expectation of somewhere around $1.25 million. They could not put words to how that they felt about Bill Gibbins ultimate noble gesture of letting them stay. Kerry O’Brien the host of the 7.30 Report stated: ‘We’ve had some great outcomes to stories occasionally over the years. This is one of the best, as I’m sure the Rats would agree.’

On 26 February 2010 there was a function at Tobruk House, the purpose of which was to present a $1,500,000 cheque to the Royal Children’s Hospital. The contribution will support the RCH Neuroscience department by funding an annual fellowship, enabling a clinician to undertake travel to further his/her studies. The RCH Neuroscience unit has been named the ‘Rats of Tobruk Ward’ in honour of the Rats’ contribution.

400 Relative members who are located across Australia. Many members do not have the opportunity to attend the monthly meeting due to where they live or other commitments. Should any member be in Melbourne around the time of a meeting, you will be made very welcome should you have time to attend. It is an experience that you will not forget. 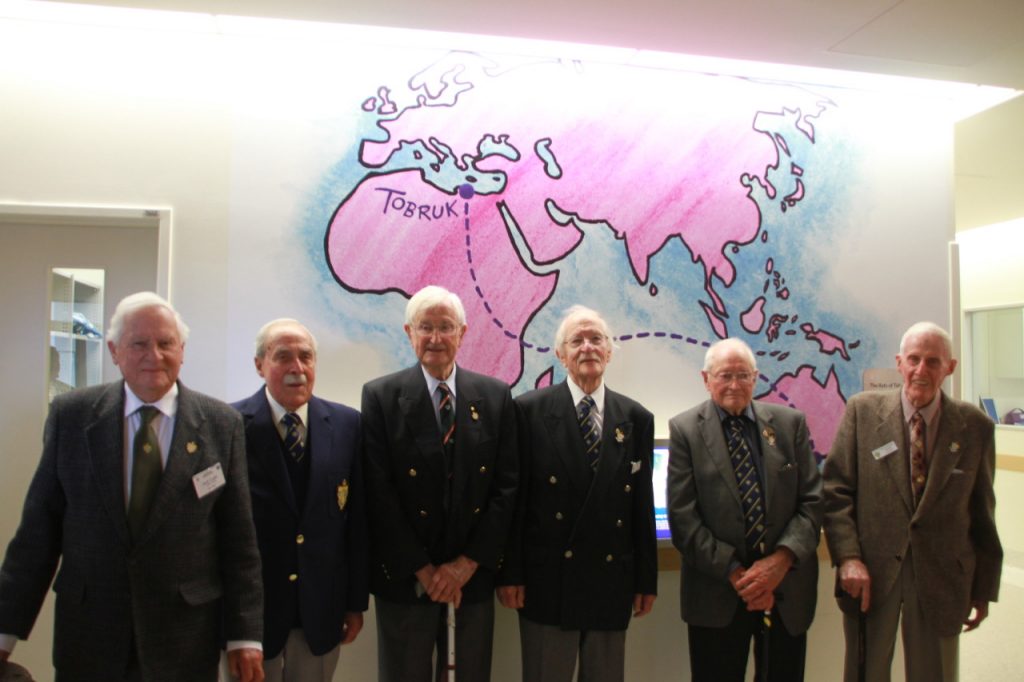