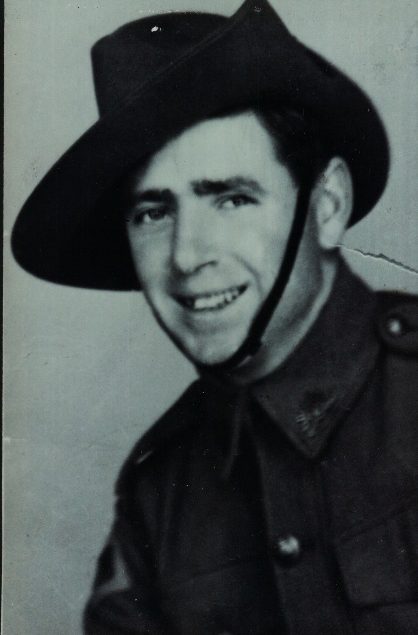 It is common for sons and daughters of ex-serviceman to say that their father didn’t say much about the war.  This was the case with my father, he would only talk about parts of his experiences, but not to any depth.  On several occasions over a few beers and glasses of wine, I tried to get Dad to discuss in more detail his experiences.  All I achieved was a hangover in the morning. What we knew was that he was one of the legendary ‘Rats of Tobruk’, who defended Tobruk in Libya, from the German forces for 242 days, the longest siege in British military history.  He was captured, when wounded in action.  As a ‘Prisoner of War’ (POW) he was transported to German POW camps in Italy and then in Poland.  From there, Dad, with two mates, escaped making it to the advancing Russian front line in Ukraine.  From what Dad told me, I have pieced together some of the jig saw from his service records, and other references.  This is Ern’s story.

In the Beginning
Born in Melbourne on 24 February 1918, Ernest William Kiernan (Ern) grew up in orphanages and foster care.  From an early age he had to learn how to look after himself.  Despite this harsh upbringing, he developed a set of values that held him in good stead the whole of his life.  By the time he was 18 years old, although short in stature, 160 cm tall (5 ft 2 in), he was extremely fit having worked hard as a labourer on farms and in the timber industry.  Ern volunteered for the Australian Militia Forces, joining the 4 / 19th Light Horse Regiment where he proved to be an excellent horseman.  He was good looking and always maintained a neat appearance.  Whilst he could only afford a single pair of shoes, those shoes were always shiny and well maintained.  He was very musical, teaching himself to play by ear, the piano, banjo, and mouth organ.

At around 18 years of age, Ern befriended the Harry family.  The matriarch of the family was Maude Harry, a widow who had eight children the majority of whom lived in the family home, a two-story terrace house in Flemington Road, Parkville.  He was made to feel welcome like a lost son.  This gave him the family he never had.

Destination Middle East
Ern enlisted in Melbourne on 16 June 1940 at the age of 22.  He nominated Maude Harry as his next of kin on his Attestation Form.   After training he join the 2nd/23rd Infantry Battalion who subsequently became known as ‘Albury’s Own’.  They were called this because a large majority of the battalion’s initial intake of volunteers came from the Albury – Wodonga region.

Just before Ern departed to the Middle East, Maude and two of her daughters, Dorothy, and Joan, gave him a gold signet ring with his initials engraved on its face.  He was wearing this when he sailed from Station Pier, Port Melbourne with the 2nd/23rd  Battalion on 16 November 1940. The ship was the Strathmore, a passenger liner converted to a troop ship.   The Strathmore sailed to Fremantle where it joined a convoy.  The convoy sailed via Colombo and then through the Suez Canal to El Qantara in Egypt.  The troops disembarked on 17 December 1940.  They were then moved by rail to Dimra in Palestine where joining the 26th Brigade, they underwent further extensive training for the next few months.

This period wasn’t without incident.  Whilst on leave, Ern and 17 other men from his battalion decided to visit the port town of Jaffa for a bit of fun and recreation.  After many beers, they started to enjoy themselves a little too much.  Their antics brought the attention of the British Military Police.  It is no secret that most Australian soldiers had little respect for the British military hierarchy.  A skirmish broke out and the Australians came off second best.   This was no surprise as the Military Police were armed with truncheons and they did not hold back on using them.  Dad and his mates were thrown in the Jaffa Jail for the night.  On return to their camp the next day, all the 18 were charged with various misconduct offences.

Tobruk
Ern being a member of the 2nd/23rd Battalion was in Tobruk at the start of the siege on 10 April 1941.  In May, Ern’s platoon was part of an offensive to recapture defence posts along the ‘Red Line’ to the west of Tobruk, lost to the German’s during the Battle of the Salient.  The platoon became disoriented in the early morning darkness and haze of battle.  They finished up beyond the German occupied defence posts in what was previously no man’s land.  They were surrounded by Germans.  Whilst sheltering in a German trench, Ern put his head up to try to see where they were.  He was shot through the left side.  A German soldier pulled him to safety saving his life.  All the members of the platoon were captured. He was later treated for his injuries in a German field hospital. He was reported missing on 17 May 1941.

Prisoner of War
Being a Prisoner of War, Ern was eventually transferred from the Middle East via the Libyan port of Benghazi, to the POW Camp PG66 located at Capua, Italy.  He arrived in September, four months after being wounded and taken prisoner.  On arrival in Italy most POWs were in a pitiful state enduring many months with limited supplies on the North African front.  Early in 1942, he was moved to Campo 57 at Gruppignano in north-east Italy.  The camp was commanded by Colonel Vittorio Calcaterra who was considered a sadist.  Conditions at Campo 57 were extremely hash and overcrowded.  Ern was at Campo 57 for around 16 months.

When the Italian’s surrendered in September 1943, Ern was one of the POW’s quickly rounded up by the Germans and transported by train to Stalag V111A in Poland.  The trains were so cramped the prisoners spent days and nights standing up with little food and water and no toilet facilities.  He was later moved to a sub-camp of the infamous Stalag V111B (later renumbered to Stalag 317) during November 1943.  Sub-camp E543 was located at Dombrova.  Here Ern and the other prisoners were forced to work as slave labour in a coal mine.  Conditions were harsh and dangerous.

Towards the end of 1944, with Germany facing defeat, the prisoners were concerned what would happen to them.  During the final months of the Second World War in Europe, allied POWs were being force-marched westward across Poland and Germany in appalling winter conditions, resulting in many deaths.  Ern and two mates Bob ‘Doc’ Harvey (WX11924, 2/28 Inf Bn) and Lindsay ‘Snowy’ Lehmann (VX12450, 2/5 Inf Bn) decided to escape and head for the advancing Russian forces along the eastern front.  If they were recaptured by the Germans, there was a high probability that they would be executed.  After several days with the support of local patriots and after several close calls, they finally achieved their objective.  Although the Russian’s had been prewarned regarding escaping allied prisoners, it was still a precarious situation approaching the front line.  They yelled out ‘English, English’, hoping that they would not be fired upon.  They were worried that if they called out ‘Australian’, it could have been misinterpreted as ‘Austrian’ and mistaken for the enemy.    When they finally met up with the Russians, they were taken to a freed POW Camp, where they were identified and after several weeks, passed on for transport to Odessa, Ukraine.  They reached Odessa in March 1945.

Now liberated, Ern and other ex-POWs started the long voyage home, sailing from Odessa on 8 March 1945.  The route was via Palestine where they changed ships.  The ‘Moreton Bay’ arrived at Port Melbourne on 14 April 1945.

Home Again
It was the morning of the 14 April when Ern disembarked the ‘Moreton Bay’.  He had been away almost four and a half years.   He was 27 years old.  He was still wearing the gold ring given to him by the Harry’s before he left Australia.  If that ring could talk what a story it could tell.

There was no one to greet him when he arrived, as there wasn’t any prior news regarding his homecoming.  An Officer offered him a lift which Ern declined.  He hailed a taxi and headed straight to the Harry’s house in Parkville.  He was greeted at the front door by Maude Harry.  Ern rushed inside, ran up the stairs and jumped on the bed of Dorothy, waking her up.  There must have been a hell of a party at the Harry’s that night.  Ern would have been in the centre of the room leading everyone in a good old sing along.

Later that year Ern married Dorothy.  They went on to have three children: Robert, Michael, and Josephine.  Ern worked extremely hard for many years, so that he could give his children everything he never had when growing up.  He had several war related ailments and eventually received a TPI Pension.  There is no doubt that Ern also suffered from what is now known as Post Traumatic Stress Disorder, which raised its head from time to time.

Ern noticed that a number of his mates who had a similar service record, had an additional medal.  It was the Defence Medal awarded for six months service in non-operational areas.  He queried this with the Central Army Records Office and was advised that he only had 5 ½ months of service which counted towards the medal, this was insufficient.  Surprisingly, more than 2 ½ years as a POW and the several weeks in the Russian freed POW camp did not count.  Erm felt cheated and challenged the ruling.  He was eventually awarded the Defence Medal.  The other medals that were awarded to Ern are the 1939/45 Star, Africa Star, War Medal and Australian Service Medal (1939-1945).

Dorothy died on 16 January 1999.  They had been happily married for 53 years.   Ern looked after himself for most of the next 11 years, using the skills he developed when growing up.  This was despite his vision becoming severely impaired due to macular degeneration.  For the last twelve months of Ern’s life he had to go into aged care; he had one too many falls at home to continue living by himself.  On several occasions at the Age Care Facility, he was found walking the corridors looking for a way to escape.

Music sustained Ern throughout his life, so at his funeral, country singer Billy Bridge sang a few songs.  Billy was so moved by one of the eulogies which included the story of the ring, he wrote and recorded a song about it. Some of the lyrics to ‘The Ring’ are written below:

“He went to war with nothing but his courage and a ring
Three women placed it in his hand with love
He held it tightly in his hand as he sailed off to war
His angel looking down from up above
It was with him when he landed on those barren foreign shores
As the Rats did storm the deserts of Tobruk.
He held it hidden safe away when shot by foreign guns
As they locked him in that place that no one dared to look
But he held that ring hidden hard against his skin
So they could not take it away
And he held that ring given hard against his heart
Cause he vowed he’d return again one day”

Author:  Mike Kiernan
Proud Son,
I wear Dad’s ring as a tribute to him.
July 2021